A Decade for Dewayne
Story & Photos by Tess Davis 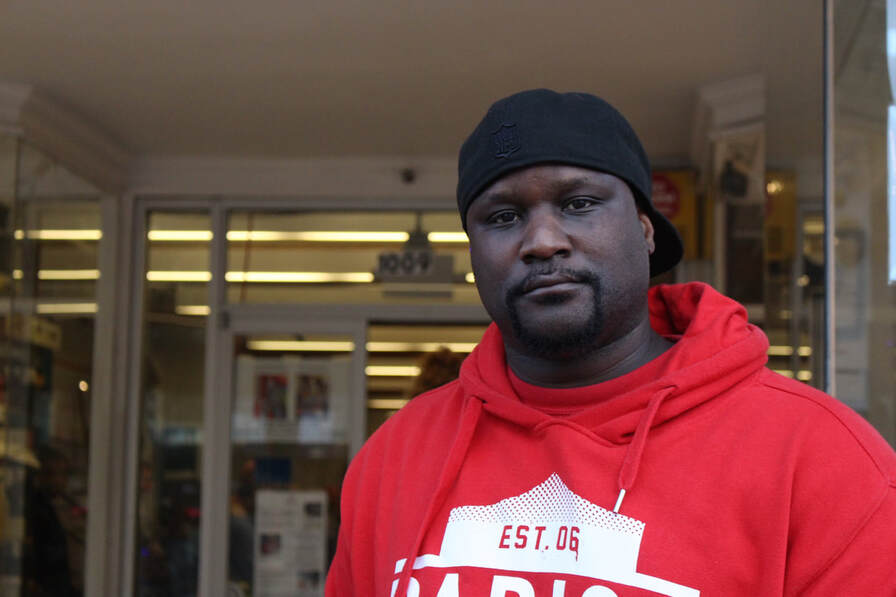 June 29, 2020 marked the ten year anniversary at Hospitality House for Dewayne Cobb, Program Manager of our Tenderloin Self-Help Center (TSHC). And frankly, we don’t know where we’d be without him. It is with great joy and honor that we congratulate Dewayne on his ten years and take a moment to acknowledge our gratitude for all that he has graced us with.  Dewayne is a crucial component of Hospitality House’s unique DNA, and for this reason, I asked him to do an interview with me. If you knew of his reluctance to be the subject of any article about him, I’m pleased to tell you, he actually agreed. You have no idea how historic this is!

Dewayne began his journey at Hospitality House as both an on-call Peer Advocate and part of the custodial staff but it wasn’t long before he transitioned to a full-time position. It was clear to Dewayne’s colleagues and supervisors that he had a knack for connecting with his co-workers and community members alike. Dewayne wasn’t shy, but he wasn’t “in-your-face” either. He was there in the way you’d want someone to be-- a shoulder to lean on, an ear to bend, a great sense of humor to lift your spirit, and most importantly, a grounded presence to make you feel sane when the world seems like it’s getting ready to swallow you whole. There are not a lot of people that can do that. For Dewayne it came natural. And still does.
Over the past ten years, Dewayne has moved his way through the programs and positions at Hospitality House, giving him a particularly useful insight. He can tell you exactly what each program offers and the best way to get the services you need-- making him an exceptional Program Manager at Hospitality House’s largest and most bustling program, the Tenderloin Self-Help Center.  Dewayne’s extensive knowledge of the services Hospitality House offers, paired with his magnetic personality makes him incredibly effective at his job. But beyond that harmonious combination, Dewayne has a unique perspective on what genuine community support looks like.

Dewaynes’s path to Hospitality House was a challenging one. After his release from prison, he resided at 111 Taylor, a so-called “community reentry center” located just a few blocks away from our Hospitality House’s main offices. This particular halfway house is owned by Geo Group, which operates “126 secure facilities, processing centers, and community reentry centers encompassing approximately 94,000 beds” in the United States. In layman's terms, that’s 126 prisons, immigration detention facilities, and halfway houses.

Ironically, 111 Taylor is the site of the historic 1966 Compton Cafeteria Uprising, a collective queer resistence to police harassament and the first known LGBTQ related uprising in the United States (preceding the well known 1969 Stonewall Uprising in NYC). The genesis of Hospitality House can be attributed to this uprising but we’ll save that story for another article.

While Dewayne’s experience at 111 Taylor was not unexpected, it was certainly eye opening. Dewayne describes what it was like to reside at 111 Taylor. It was simply a bed to sleep in and nothing more. There was no support, no guidance, no direction. “[111 Taylor] never connected me to jobs or resources. I had been incarcerated for a while, I needed clothing. I had never lived in the Bay Area. They sent me to job search, but I had nowhere to go, I couldn’t even get a bus token. They said ‘figure it out and bring us proof you’ve been job searching.’ I was lost here,” he attested. “I don’t expect that much from most people anyways, because of my past, so I wasn’t surprised that they [Geo Group] didn’t do anything, that it was more about money [to them],” he added.

But Dewayne found support in other residents. They created their own support systems. “I was lost but the people that were there before me, the other residents, they were the ones posting resources on the board. Not the case managers. They’d share resources like ‘go here to get a job, go here to get clothing.’ The ones who needed help were the ones who helped each other.”

This experience stuck with Dewayne. It drove him to realize his calling — to actively support his community by helping folks who are walking similar paths to his. He knew that with effort and dedication, he could help others improve their lives and support them in the way he once needed support.  “I come from being incarcerated,” Dewayne explained, “and some of our staff are former drug users, and so on. We have all types of people [at Hospitality House]. And if each one of us reaches out to someone, especially people who walk the same path that we just came down, then it’s up to us to help out.”
Because Hospitality House uses a peer based model, many of our staff members look to their lived experiences as a learned lens to help community members navigate their own current struggles. Dewayne understands why this is important and continues to nurture that growth within his staff so they too can guide those seeking help as well as grow within the social services field. “It’s never too late to change, and it’s never too late to learn,” Dewayne emphasized. “So I bring that to my staff and then pass it on to the community. Everyone should think like that. Because the [criminal justice] system is not geared to help you. If we don’t do it, who else is going to do it?”

Over the last few years, Dewayne and a group of Hospitality House staff members composed mostly of former lifers and seasoned social justice warriors have implemented a new program to support reentry folks-- a combination of extensive resources and services paired with the support group. “House Talk,” as Dewayne describes, “celebrates where you’re at, and pushes you to strive for more”.  People coming out of incarceration, especially those with double-digit or life sentences need guidance. Society is not set up to help formerly incarcerated folks reintegrate into the community. Dewayne breaks it down, “You think of prison reform, but what about the daily living? Providing for your family, providing for yourself? One strike against you, two strikes against you, and if you’re formerly incarcerated and a person of color and that’s like four strikes against you”.

Dewayne is happy with the direction our organization has been heading. “Hospitality House has grown a lot in these last ten years,” he says. “Grown in different ways.” The organization has continued to nurture and expand the Community Building Program (CBP) where Dewayne spent several years working as a Case Manager before transitioning to his leadership position at the TSHC.  The CBP was established around the same time Dewayne was hired so he has witnessed first hand its evolution. “We’re getting more political, looking at the why of things, and asking ‘why are you still doing the homeless like this’ and then helping [community members] find their voice. You can come to CBP, get connected to the Community Organizing Work Group, teach people to go to City Hall and speak up, to have their voice in the mix. Getting people out to vote. A lot of poor and low income folks don’t usually vote, but we’re getting them out to vote. I like where Hospitality House is going.” Dewayne acknowledged. Of course, we have a long road ahead in the fight for social justice, but knowing people like Dewayne Cobb makes that road feel a lot more manageable. Hospitality House is grateful to have Dewayne as a part of our organization's Leadership Team. Here’s to another ten years!

Sylvester "Slick" Guard: An Artist From & For The Community
Story by Tess Davis 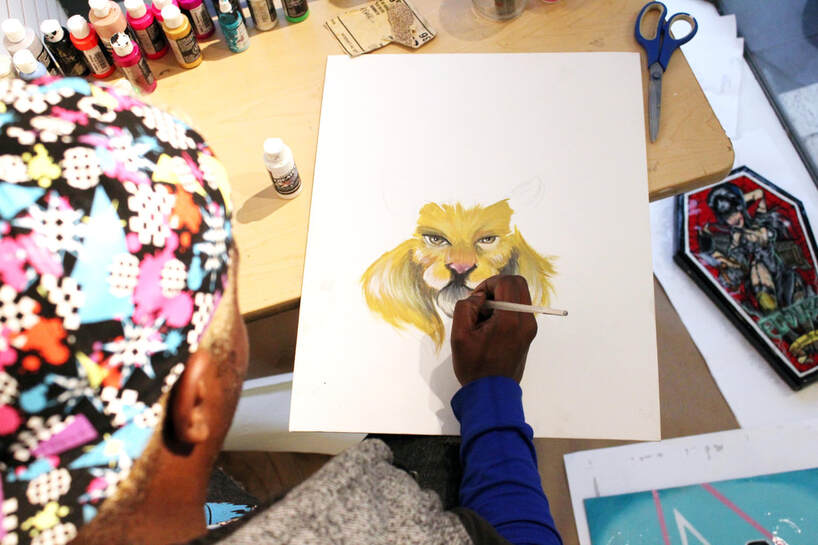 “When it comes to my art, it’s just something I've alway done. I don't really have any control of it, it just comes out, it is what it is.”

Meet Sylvester “Slick” Guard, long time friend of Hospitality House, local artist, and self-identified “dude that knows how to use a pen.” If you’ve seen his work, you know that’s an awfully humble title.

Slick is well known in San Francisco, especially in the Tenderloin and South of Market Area, for his bright, colorful, and beautifully crafted murals. But Slick’s not just another talented artist living in San Francisco (because let’s be real, the Bay Area is overflowing with talent), Slick is also known for being from and for the community. Born and raised in the Bay Area, Slick began his journey making art when he was just old enough to pick up a pen. By the age of five, he had won his first art award from the Oakland Unified School District. Four years later, young Slick was painting his first mural. Fast forward to now, and he estimates he’s done about 30, the majority of them in San Francisco.

Slick’s love for art goes far beyond simply creating it. He creates it to share it with his community and to inspire those who came before him and those who will come after.  He paints messages that empower TL and SOMA residents, depict their community in a way they can feel proud of, and give them a sense of ownership. One of Slick’s recent murals in Stevenson Alley (SOMA), is an example of this. Slick explains “It’s indicative of the people in that building and the people who sit in that alley. And they wash it everyday, they take care of it, cause they know I'm from town...they respect it.”

Beyond inspiring his community, Slick is actively seeking new opportunities to bring more neighborhood artists into the mix. “I want to see a wall and then raise the funds for it..I want to get these projects and keep them in the neighborhood. If you live in the Tenderloin, you get the first crack at the wall. We have too many rich guys painting our walls and they’re not painting messages that are good for us...clowns, three eyed pigeons, wine bottles, needles. We have enough of that already. If you want to be edgy, paint a forest...Paint some positive images of the people you see around you.” Slick wants a Tenderloin where the people who live in the community are the ones doing the murals, painting artwork with hopeful messages that they get to wake up to everyday.

Just like the larger Bay Area, the Tenderloin does not fall short of talent and Slick knows this.  “You see all those people standing out front [on Market Street], those are artisans, those are poets, those are writers...We owe them the chance to have their voices heard.”

Slick won’t stop pushing until he sees his community not just represented but thriving in the San Francisco art scene, where Tenderloin and SOMA artists are painting their neighborhood murals, displayed at local exhibitions, and represented by SF galleries. Slick concludes, “It’s time we showcase what our city can do and what makes our city so great.”
​
Check out Slick’s work on Instagram, @slickpoppy.