Every Other Month: February 2015 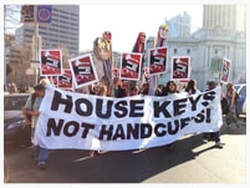 At the age of 16, Paul Boden became homeless. In the decades since, he’s earned national recognition for his advocacy on behalf of homeless people. He is one of the co-founders of the Coalition on Homelessness and is currently director of the Western Regional Advocacy Project (WRAP), a multi-state advocacy group on homelessness. He is also the author of “House Keys Not Handcuffs,” a recently-published book reflecting on his more than 30 years of homeless organizing in San Francisco.On a recent radio broadcast of KQED’s Forum, Paul talked with Michael Krasny about the criminalization of homeless people: “Of over 1,500 people we’ve interviewed (on the streets), the top three criminal offenses that people are being charged with are sleeping, sitting, and standing still. Loitering they call it; we call it standing still. Those are the top three criminal offenses that people in 5 states, 12 communities, over 1,500 people (are charged with). And I’m talking about 81 percent when it comes to sleeping, of 78 percent when it comes to sitting, of 70-something percent when it comes to loitering…The time has come to not just stop the current trend of homeless people being the target (by the police)…We want to make damn sure the next target group will not be targeted by these kinds of police enforcement programs.”

As San Francisco’s affordability crisis worsens and housing prices soar, more and more people are unable to afford to remain housed in San Francisco. Many with nowhere else to go find themselves on the streets of the Tenderloin and other communities subject to criminalization for simply being unable to afford a home in their community.
​
On February 10, 2015, Hospitality House’s Community Building Program hosted “30 Years of Homeless Organizing, Art and Politics”: a Community Conversation with Paul Boden, along with Bob Prentice, former director of Health Care for the Homeless in SF and the Mayor’s Homeless Coordinator during the Art Agnos Administration, and Art Hazelwood, a long-time community activist and accomplished artist, as they shared reflections and lessons from more than 30 years of homeless organization, arts, and politics in San Francisco and beyond. Over 100 people attend the event at the Kelly Cullen Center, in the Tenderloin including Supervisor John Avalos and many folks from the neighborhood.

STORIES FROM THE ‘LOIN: An afternoon of theater in the TL
In the middle of a Tenderloin afternoon, on a Tuesday to be exact, people began to fill the auditorium inside the Kelly Cullen Community, a former Central YMCA building erected in 1910 that features a majestic proscenium stage framed by deco-style gold leaving. Backstage, anxious actors, students of a special workshop collaboration between the American Conservatory Theater’s Stagecoach program and Hospitality House, prepare their lines. These are not ordinary student actors with ordinary lines to recite.As all 150 seats in the auditorium find curious audience members, Ivan Veratries to contain his excitement: “I thought only 10 people might show up!” Ivan is the Program Manager of Hospitality House’s Community Arts Program (CAP), the only free fine arts studio open to neighborhood people who normally do not have access to resources for cultural enrichment. In the past month, Ivan has worked closely with ACT in constructing theater workshops for participants of Hospitality House’s CAP and Community Building Program. The workshops encouraged participants to tell their stories of personal struggles and triumphs against discrimination, addiction, and life on the streets. Their efforts were to culminate in a show they aptly titled Stories From the ‘Loin. “By sharing the challenges we have faced, the choices we’ve made, and what we’ve learned from the outcomes, we can inspire others and share our own wisdom,” Ivan quoting grassroots organizer and lecturer,  Marshall Ganz as he addressed the capacity crowd brimming in anticipation. “Because these stories express our values not as abstract principles, but as lived experiences, we have the power to move others.” Once the house lights lowered, the actors populated the stage to depict a bustling Tenderloin neighborhood with characters from all walks of life interacting, avoiding, embracing, surviving. Serving as a backdrop was a large canvas of live art painted by Jim Housley, each brush stroke slowly revealing the City’s skyline. Sirens blare. Enter a law enforcement figure who begins interrogating each character as suspects, a commentary on a daily occurrence in the TL.The stage eventually clears, leaving only George Bracey perched on a wooden black box, her dazzling emerald top gleaming in the lights. She confidently shared a painful story from her childhood. George was a graduate of the H.O.L.D. project (Healing, Organizing, and Leadership Development) through CBP. H.O.L.D. is an exciting internship project that focuses on reducing the impact and trauma in the Tenderloin while building residents’ skills for community organizing, empowerment, and social change. After the show, she gave credit to CBP Program Manager, Joe Wilson, for his guidance and encouragement to tell her story. “It was through a talk with Joe Wilson that I was able to navigate my past, reassess my experience, and meet the challenge of telling my story. I was willing to tell everybody else’s story, but Mr. Wilson told me to tell my own story because if I didn’t tell my story, somebody else would…. As hard as it was, and it was very hard, it still is hard just reliving it, I had to tell it… so in order for me to receive my healing and to organize the aesthetics of my life along with the harshness, I have to keep that in perspective and put it out there to get rid of it.”

The stories continued to unfold with each emotional prose intertwined in music, video, and pronounced movements choreographed by Alexa Erbachof ACT. During the rehearsal process, Alexa had instructed the student actors to think of life as a dance. “Everything you do is a dance. You just need to trust yourself.” Trust. This was one of the main principles establishing the foundation of the workshop. “Right in the beginning, the first step was TRUST,” said James Scoville, one of many seasoned CAP artist who told his story of the first time he walked through the program’s studio doors. “It was written bigger than anything else (written) on that board. And once we all got that early in the rehearsals, for me personally, I was ready to tell my story.”
THIS JUST IN! An encore performance of STORIES FROM THE ‘LOIN will be taking place on Friday, February 27th, 7:30pm at Grace Cathedral in San Francisco. If you missed out on their last performance, here’s you chance…. or see it again! Click here for more information. 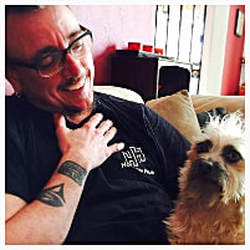 Hospitality House is expanding its Employment Program and is delighted to introduce Rob Arbo as Program Manager. Rob has dedicated more than 20 years of service to San Francisco, serving some of the most dynamic San Franciscans he has ever met – including ten years as the Program Manager of Homeless Services for Toolworks, a local non-profit providing employment and training services to people with disabilities. For the past decade, Rob has also been an active member of the Homeless Employment Collaborative and is excited to bring his experience, enthusiasm, and passion to the Hospitality House team.Rob strives to break the cycle of poverty by encouraging folks to dream big, beyond their wildest dreams and imaginations. He is always mindful of seeing everyone’s potential, he strongly supports initiatives which seek to address the root causes of the cycle of poverty and homelessness, and he believes in radical inclusion. In 2013, he co- founded Trans Housing, a housing advocacy initiative for non-gender conforming folks in and around the Bay Area.In his downtime, Rob enjoys hiking,camping, backpacking (anything in nature, really) with his partner, darling daughter, and Milton the dog! He has a fierce eye for vintage and is trying to turn his not-so-green thumb green this spring by starting his very own home garden. Rob’s current mantra is: “We’re all in this together!” 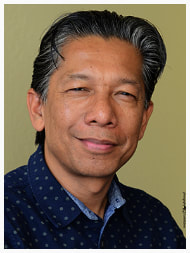 Considering the big shoes left to fill by Hospitality House’s Development Director of the past decade,Daniel Hlad, the search for his replacement ended up literally a couple of feet away from his desk. After spending a year and half learning how to maneuver the precarious, fickle world of fundraising from Daniel himself, previous Development ManagerAllan S. Manalo has taken the wheel.Allan joined Hospitality House in 2013 after spending several years as the Artistic and Managing Director of Bindlestiff Studio, a non-profit black box theater venue located on 6th Street, ironically next to Hospitality House’s Sixth Street Self-Help Center. He is very involved in the issues facing the rapidly-changing South-of-Market Area (SoMa) in particularly with the Filipino American community, and currently serves as a member of the SoMa Community Stabilization Fund Citizen’s Advisory Committee. “I spent over a decade walking up and down Sixth Street and got to know the people in the area – the residents, the artists, the workers. I love SoMa and have found I share that same kind of love for the TL.”Allan is extremely excited about his new role, but confesses that butterflies have nested in his low intestines. “I’m following a Hospitality House legend; I really am. I’m thinking of having Daniel’s desk dipped in bronze, but that might make it hard to move during our agency cleaning day. In all seriousness, he’s one of my mentors, and I’ll miss him dearly. However, he encouraged me to make the position my own and has confidence that I will do well. His faith in me keeps the butterflies at bay!” Allan’s first task: to produce a spectacular 30th anniversary celebration of Hospitality House’s Annual Art Auction. You can help him out by reading the story below…
The 30th Annual Art Auction is coming, become a sponsor now!