With all of the activities and attention being paid to the revitalization efforts of the Mid-Market, the voices and concerns of those living in the neighborhood don’t always rise to the top. People struggling to survive with low incomes don’t typically have the access or awareness to attend meetings, public hearings, or political rallies when their daily needs, physical and mental well-being, and long-term stabilization aren’t being met. At the same time, many of these residents express concerns within Hospitality House’s programs about how these activities are impacting things like rental prices, diminishing services for poor people, and how those new to the neighborhood will complement its unique culture and diverse residents. 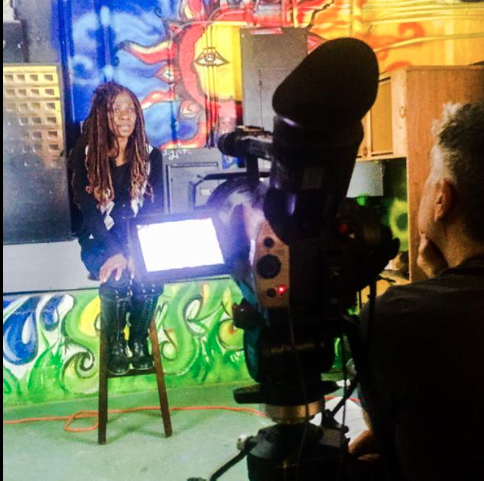 In collaboration with Urbanstreet Films (UF) and Archive Production (AP), Hospitality House has developed a project drawing attention to the issues of displacement and gentrification as a consequence of the revitalization efforts of Mid-Market, Tenderloin, and South-of-Market neighborhoods.
​
Dubbed as “Oral NowStories” (a deliberate word play on “Oral Histories”), this film/video project collected the voices of these often under represented people, utilizing new media methods to distribute the footage in ongoing internet posting as well as up and coming public screenings & forums. The project was made possible through the Arts & Communities: Innovative Partnership realization grant awarded by the San Francisco Arts Commission for the purpose of connecting vital communities through art projects. The collaboration of the three organization produce a series of video stories showcasing current residents and their concerns, fears, and hopes for the change happening around them.
The Workshops 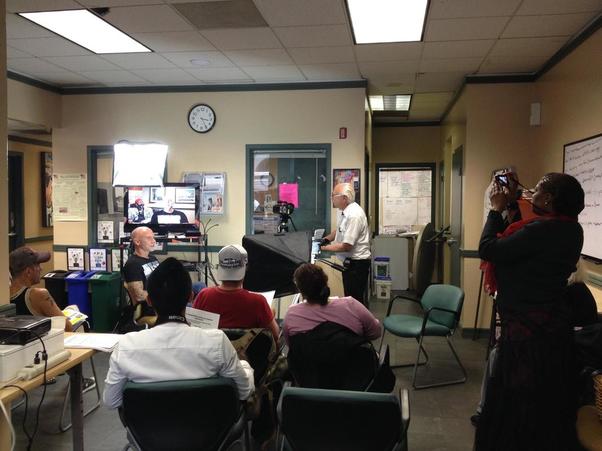 Scott Peterson of Archive Productions uses Ivan Vera, Program Manager of Hospitality House’s Community Arts Program, as an interview subject to talk about lighting and camera placement.
The Oral NowStories project began in the Summer of 2014 with a series of storytelling and technical video production workshops offered to neighborhood residents, workers, and community stakeholders. The storytelling workshop taught participants the skills of how to conduct an on-camera interview including questions of composition, listening for cues, and following the story.
​
At one point during the interview workshop, District 6 Supervisor Jane Kim made a surprise visit allowing workshop participants to utilize their newly acquired interview skills on an actually city politician. 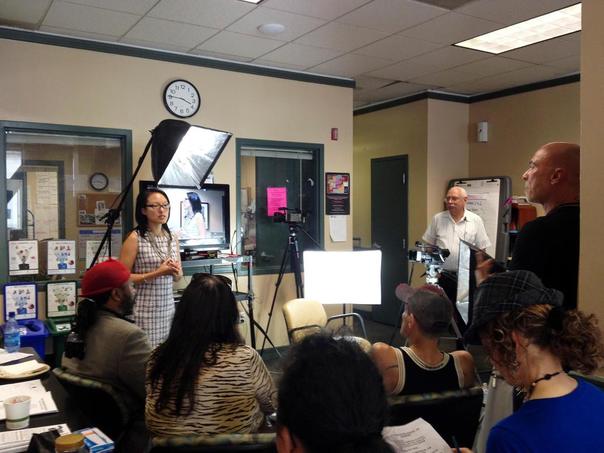 Supervisor Jane Kim drops in for an impromptu interview.
Part Two of the storytelling workshop explored the role of the interviewee, teaching participants how to craft their stories vividly with the use of imagery and focus. The workshops continued with the development of technical skills behind the camera including camera operations, lighting, and sound. 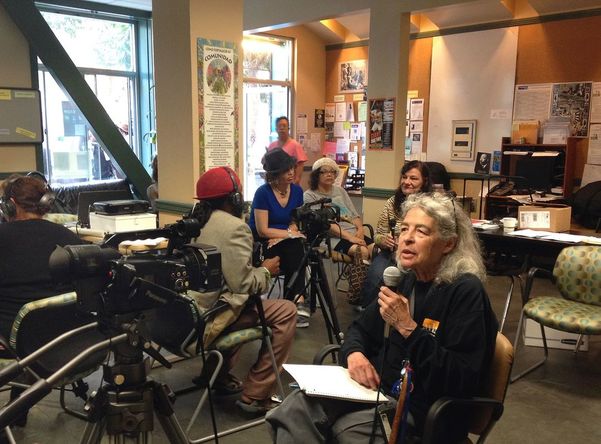 Participants of the Oral NowStories workshop take turns interviewing each other. 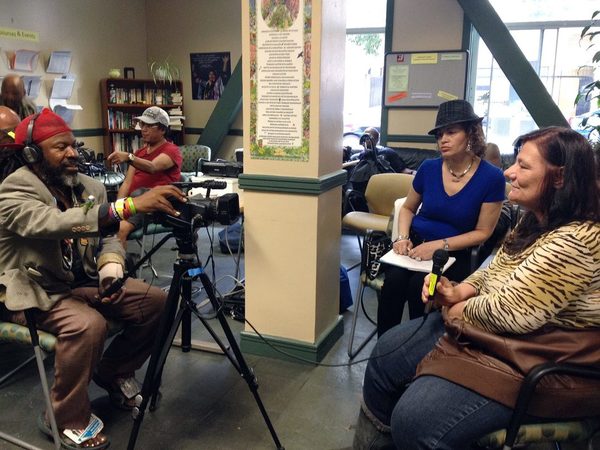 The Interviews
After the Storytelling, Interview, and Technical Workshops, participants were invited to be in front of the camera to tell their stories, their hopes for the neighborhood they live in, the concerns and fears they have about gentrification, and their opinions about San Francisco’s “revitalization” efforts. 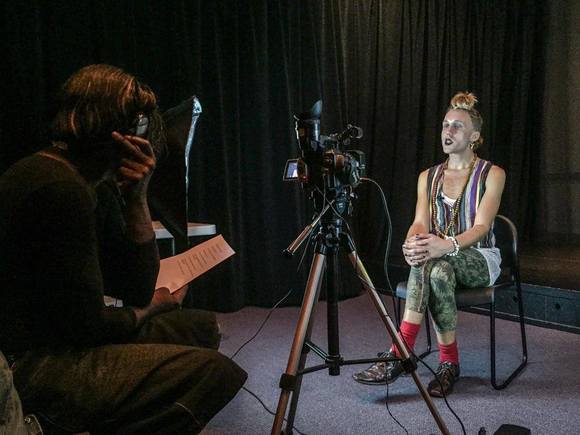 Over the course of 16-months, the project partners recorded over 40 interviews from people who reside, work, or are connected to the neighborhoods experiencing the impacts of the “new” economy that has created the affordability crisis the city is currently experiencing. 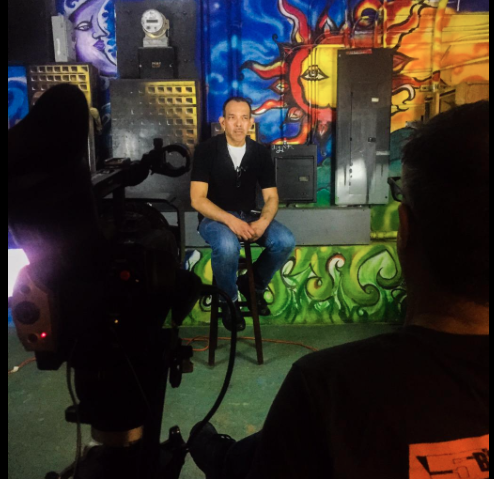 Tenderloin resident, writer, community activist , and Hospitality House Board member, Jesse James Johnson expresses his views on the encroaching gentrification of the Tenderloin.
Many of these interviews will be posted here in the coming months. However, please watch clips of these interviews which can be seen in the “Making of Oral NowStories trailer above.
Meeting people where they are at…
Although effective social media strategies have been used in the past to inspire calls to social change, poor and homeless people are typically further behind the curve than people with means in understanding and utilizing social media and other technologies. By meeting people where they are at, the Oral NowStories project lessens this gap by bringing their voices within the social media fold in an effort educate the wider population on how revitalization efforts directly impact residents in these communities.

The Oral NowStories project facilitates cross-cultural communication between a wide variety of stakeholders, ultimately leading to an investment by all parties in the social change necessary to build a strong community together. While many homeless and poor people live very public lives on the streets, they are often ignored, encouraged to remain hidden, or dismissed out of hand. This project seeks to provide an alternative narrative to this social conditioning. Social media and other new technologies remain the “final frontier” for poor and homeless people. While many enjoy the benefits of telephones, televisions, and other mediums that have been available (and affordable) for years, many do not have access to the internet, cable, or even mobile devices. This disparity limits the thoughts and input of an entire population. While this project will not address this disparity on a macro-level, it can bring a community-based solution to address it within the context of the San Francisco’s “revitalization” efforts.
The Oral NowStories Project was made possible by a grant from the San Francisco Arts Commission