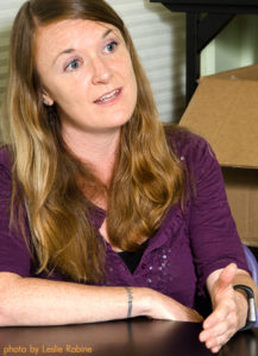 ​Abigail worked at the Hamilton Family Center in San Francisco as a Residential Counselor as well as a case manager for supportive housing in the Mission District. She spent a couple of years in Guatemala working with communities in advancing their own goals of self-determination. She then spent two years in Spain pursuing a Masters in Social Policy where her thesis examined the importance of financial independence specifically for immigrant women and women of color as a mechanism to remain safe from violence.

She is passionate about financial and economic empowerment by giving people the tools and knowledge to create their own pathway to self-sufficiency and believing in her role to assist them. “What people need to know about me is that I am ready to go over and beyond in supporting folks in achieving their goals – no judgments, no pressures, and no agendas other than your own.”

After returning to the Bay Area about a year and a half ago, she was hired to lead Hospitality House’s newest program. She was drawn to the organization’s guiding principles and approach to building community; first and foremost, Hospitality House’s peer-based model. “The greatest way to impact change is when someone has a lived experience. It doesn’t matter how much you’ve studied, what degree you have, I think a lived experience is the most valuable perspective.” she affirmed.

She also values how Hospitality House really prioritizes building strong relationships within the organization and the community and how these relationships are embodied on every level. She is impressed by the comprehensive approach of all six programs. Although each program has a very different objective, “they complement each other in a way that really does empower the community.”

One other thing she feels is unique about Hospitality House is its work in community organizing and advocacy. “We offer both direct services, which is essential for the community; life saving and empowering services. The other side is advocacy, systems change; not just impacting change every day with one individual, but impacting change on a large scale through policy.”

Abigail’s goals for the Employment Program is to continue building and strengthening relationships with other agencies as to not duplicate services and work closer together. She would like to make more connections with employers in order to bridge gaps in understanding the dynamics of the Tenderloin populations, and to create more programming on a regular basis beyond hiring events.

“I would love in the future to have ongoing computer assistance, mock interview assistance, creative writing for interview and cover letter assistance. I want to ensure that the Employment Resource Center continues to be an open space where folks receive individualized support. Being a job seeker can be daunting – I want you to know that your personal experiences speak incredible depths – we are here for you.” 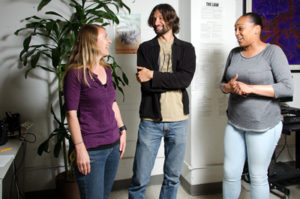 A New Mural in Clarion Alley
Over the past three months, Community Arts Program (CAP) staff and neighborhood artists have collaborated with the Clarion Alley Mural Project (CAMP) to speak directly to a rapidly gentrifying San Francisco.

Envisioning the potential for a mural began last March when CAP participants, staff, and community artists decided together that the mural must be reflective of a diverse San Francisco and Hospitality House’s core values of Community Power, Resilience, Dignity, Mutual Respect, and Self-Determination.

CAP staff Robert Chambers designed the mural and led participating artists into the five-day painting project in mid-June.  The result is Clarion Alley’s newest mural proudly declaring that “We all deserve a healthy and safe community.” 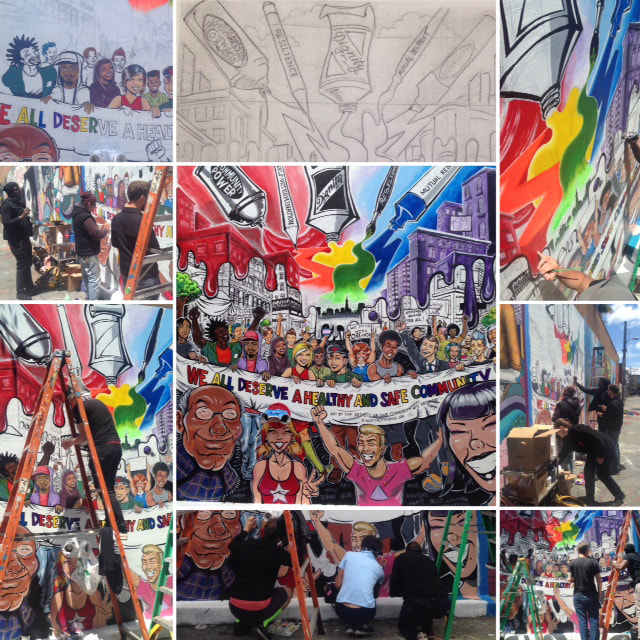 Stages of creating a community mural [Photos by Emma Fenton-Miller]
Come join us as we celebrate the CAP’s new mural along with the unveiling of a new mural by the Western Regional Advocacy Project (WRAP) on Friday, July 22nd at Clarion Alley off Valencia Street in the Mission District. Festivities will begin at 6:30PM with live music, spoken word performances, dancing, organizing and having a blast!

A Journey of Discarded Yesterdays…
[A version of this story will be appear in the San Francisco Chronicle on July 20th.] 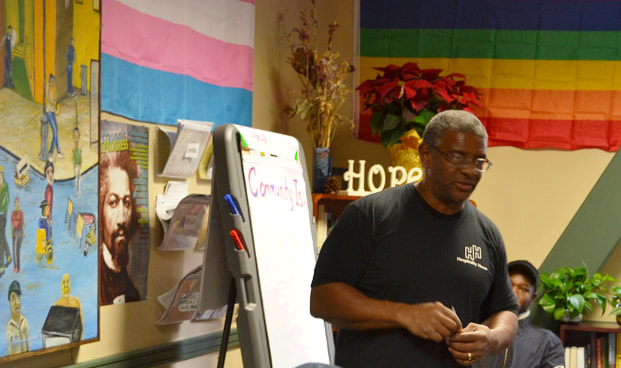 Thirty-four years ago I was homeless, broke and nearly broken on the streets of San Francisco. A lifetime ago, but never that far away. Thankfully, I think, I’ve never known the struggles of drug addiction. But I have known loneliness. I’ve known heartache.  I’ve known what it means to cry myself to sleep at night. And I’ve known the desolate emptiness from not having a place, any place, to call home.

A couple of wrong turns, a misplaced compass, and one day you realize that your boulevard became a cul de sac. So many nights – and even some days – I wasn’t sure if closing my eyes would ward off my invisible demons, or unleash them. There is a stark, unshakeable truth to being homeless: having ABSOLUTELY NOWHERE to welcome stillness, not knowing – often trying to forget – the comfort and reassurance that four walls can bring. An overwhelming emptiness consuming the core of what it means to simply belong somewhere. Belonging is what it means to be human. Being. That stark reality may be difficult to fully grasp by someone who has not experienced it.

I remember one day walking so much I was afraid if I stopped, I wouldn’t be able to move my legs again. I remember interminable nights sitting for hours in the old Jack In The Box at 7th and Market Streets, meticulously nursing a single cup of coffee, avoiding eye contact with the security guard. I remember early mornings climbing into a truck with 10-12 other wandering souls, delivering advertising circulars all over the Bay Area, towns like Sebastopol – seemingly with one house every ten miles. Some days I was lucky if I made 5 dollars for a 12-hour day’s work, enough for cigarettes, a dollar pair of gloves, and that cup of coffee. Mercifully the day would end, dreadfully the demons returned. Fear. Anger. Tears. Thankfully – often regrettably – the morning finally came.  Alone. In. A. Crowd.

What would my mother say if she could have seen me sleeping on the street? Her only son wandering, lost, the light barely flickering in my eyes? Could I bear the look in her eyes? More demons. More pain. More tears.

My journey of discarded yesterdays somehow brought me to this place, Hospitality House. Not quite broken but dangerously close to it. I’m not sure I could ever point to THE thing that happened for me, the subtle but unmistakable turning point. It happened gradually, the long road back. I remember with total clarity that indescribable yearning for a human touch, for eye contact without pity, but also without judgment. Yet fearful of the wounds opened by that same touch, by searching eyes.

And for more than thirty years, my friend and brother from another mother, Paul Boden.

Lastly my wife Cherie, who has loved me simply and deeply and without end, in big ways and little ways, through laughter and heartache, for more than twenty-five years.

A lifetime. No more discarded yesterdays.

My mother has lived long enough to see the light again in her son’s eyes. A good thing.

Epilogue…Some time ago, a group of folks gathered for a meeting, to launch what they considered to be a noble experiment. In their words, “To reaffirm faith in fundamental human rights, in the dignity and worth of the human person…and to live together…with one another as good neighbors…”

Last month was the Seventy-First Anniversary of the founding of the United Nations. In San Francisco. The City of St. Francis. 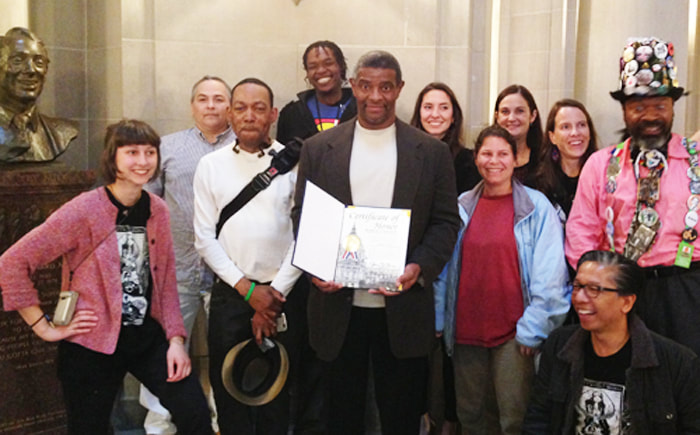 EAR TO THE GROUND
Hospitality House takes action on issues that impact our community! Find out how you can, too, by keeping your ear to the ground.
SF Media Blitz on Homelessness featuring Hospitality House 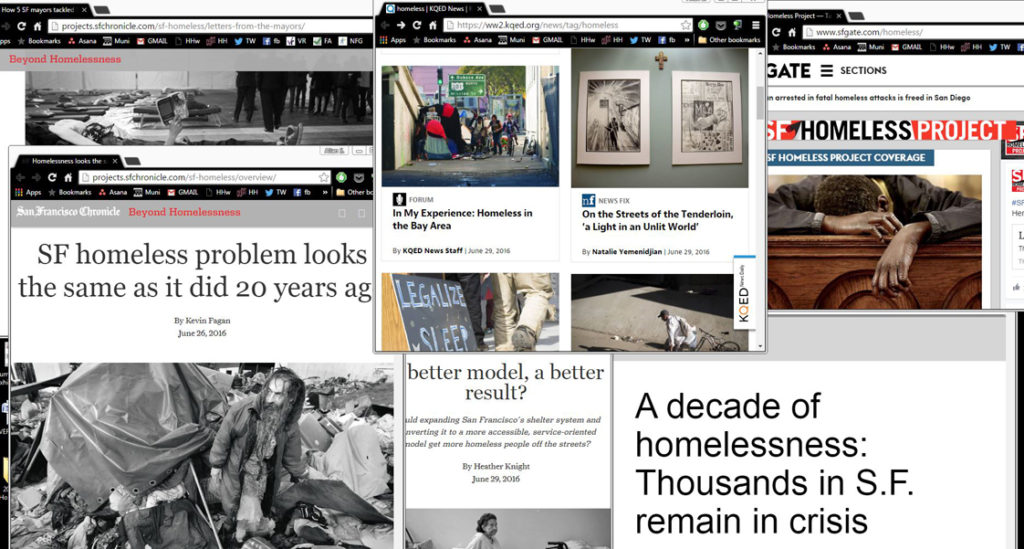 On Wednesday, June 29th over 70 Bay Area media outlets set a precedent in a first-ever SF Homeless Project,  a day devoted to broadcasting the voices of people experiencing homelessness as well as an in-depth analysis into the economic history and political legacies that currently shape issues of homelessness and extreme poverty in the Bay Area.

As Hospitality House has been a community leader since 1967, we are proud to have our staff, participants, and community partners featured in the media pieces below:
​ Share the stories above with your networks and consider becoming a sustainable donor today!
​
Together, we can tell the inspiring stories of human beings and share real solutions to ending homelessness here in San Francisco.
A FIGHT TO DO THE RIGHT THING: One of many to come
Hospitality House is a proud and active leader in Market Street for the Masses Coalition (MSMC), a collective voice of community organizations and neighborhood residents in the Mid-Market, Tenderloin, and South of Market neighborhoods which formed in 2012. MSMC works to build partnerships across levels and groups, to inform and educate our members and constituencies, and to call for policies and programs that ensure development without displacement.
Community Members Call for a Budget for Humanity, Not Brutality, Dignified Housing, Food Security, Childcare and Fair Wages for San Franciscans

Last month, community members and leaders called on the Board of Supervisors to prioritize housing, childcare, immigrant and workers rights, and fair wages over a massive increase to police department and related criminalization expenditures.

The Budget Justice Coalition, a collaboration of over 30 labor and community based organizations serving impoverished people working towards a City budget that prioritizes poor communities, authored a  $54 million proposal that would achieve greater justice for San Francisco.  The proposal called for the removal of additional police academy classes, halting the criminalization of homelessness people, removal of funding from the reserve, and making reductions to office supplies citywide as a way to pay for this.

“In order to Stay SF, ” said Danielle West of the Transgender, Gender Variant, Intersex Justice Project (TGI Justice), “we have to halt the brutal level of criminalization poor people face in this city and instead respond to very real issue of poverty with investments in housing, food security, fair wages and childcare.”

The budget in San Francisco has received increased revenue through real estate transfer taxes, sales tax, and business taxes, and is now just over $9.6 billion.

“In the midst of so much opulence in San Francisco, a city with overflowing coffers, we must prioritize the people who are suffering the most – children and youth, people with disabilities, seniors, the underpaid, the unemployed, and the underemployed” said Jodi Schwartz of Lyric, who co-chairs the Budget Justice Coalition.

As a member of the Budget Justice Coalition, the Homeless Emergency Service Providers Association (HESPA), which is co-led by Hospitality House, believes that the City’s budget should increase resources to house homeless residents and prevent further displacement of low income San Franciscans.

To that end, the 26 member organizations of HESPA called for an investment of $38 million over the next two years into San Francisco’s housing and homeless systems. After much advocacy and collaboration with the Mayor and the Board of Supervisors, HESPA was able to secure $23 million of this request, which will fund much-needed rental subsidies, eviction defense, homeless employment services, and shelter services enhancements over the next two years.
​
“If we really want to make progress on ending homelessness,” said Jackie Jenks, Hospitality House’s Executive Director and HESPA Co-Chair, “we must make targeted investments in real solutions. Housing, employment, healthcare, and dignified emergency services are all essential to this goal. We appreciate that this budget – perhaps the City’s most important policy document – reflects these priorities.”

Up Your Alley Street Fair
Sunday, July 31st from 11AM to 6PM
Folsom Street (between 7th St. and 12th St.)
Interested in volunteering for this event?  Contact: ccastaing@hospitalityhouse.org
SPOTLIGHT EVENT
Movement Warriors: A conversation with Pam Tau Lee and Stephen Bingham

Join us for an evening of reflection and celebration of struggles waged, victories won, and what lay ahead in 2016 and beyond. We’ll embrace the future of movement possibilities with a new generation of movement builders.