Every Other Month is your way of finding out the latest happenings at Hospitality House. Along with the great features and updates, we are adding a special community action section called “Ear To The Ground” where you can stay informed on the latest dialogue about issues involving our rapidly transforming neighborhoods. Read it below and get involved!
GET THE ART YOU WANT… the Annual Art Auction is here!
PORTRAITS OF TWO ARTISTS: Larry Clark & Ira Watkins
This year, Hospitality House is happy to be honoring two of its community artists, Larry Clark & Ira Watkins.
Listen to the interview by clicking here.
View both Larry Clark’s and Ira Watkins’ artwork in person at this year’s Annual Art Auction and take home the expressive stories of these two remarkable artists.

MEET CHRISTIAN CASTAING
Hospitality House is pleased to introduce its new Development Manager, Christian Castaing, who has taken over the spot previously occupied by Allan S. Manalo, now Development Director. Christian is a long-time resident of San Francisco, receiving his Bachelor’s degree in Political Science at Grinnel College in Iowa.  A prolific creative writer, Christian is currently working on a collection of his stories as he balances the demanding work of an upcoming art auction fundraiser. He has hit the ground running!

To me, coming back to the Tenderloin after five years outside of California is a lot like returning home. As a 16-year-old, I volunteered and interned with Roaddawgz, a youth writing program that was once housed in the basement of Hospitality House’s 146 Leavenworth site. Being able to return as a writer to support the development department at Hospitality House is to me like beginning a new journey back to my roots. Right now we are in full swing for the 30th Annual Art Auction coming on May 8th! Tell your friends, family, and anyone who has ever looked to art as a source of humanity. 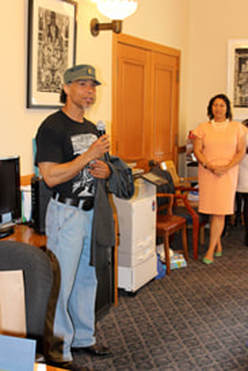 Artist Ronnie Goodman speaks about his art at City Hall (photo by Ivan Vera)
Artist and distance runner Ronnie Goodman finds inspiration in the city he runs through. “I am inspired by the beauty of this city and its diversity, balanced with the struggles of human despair. With a brush, I try to capture these raw emotions in painted images.”

Born and raised in San Francisco, Ronnie’s love of art began at the age of 6, when he first started drawing. By the age of 8, with the guidance of a close relative, he became more familiar with the different techniques in drawing, but it wasn’t until he turned 25 that he really embraced his talent and decided to explore painting.  Growing up in the Fillmore area gave him the opportunity to discover another passion, Jazz, which became a major motif later on in his works.  Growing pains took him away from art until much later when he encountered the Art in Corrections program at San Quentin where, with the help of volunteering artists who facilitated the program, he broadened his skills and discovered other techniques available to incorporate into his work.  This is where he met Art Hazelwood, one of the volunteering artists, who later became his mentor and good friend.  Ronnie’s passion was such that he ended up running the art studio at the correctional facility until budget cuts threatened closure of the program. This period gave him time to decide how serious he wanted to become with his art.

Once released in 2010, Ronnie decided to rebuild himself and strengthen his core values to make up for time wasted in his youth. Art for him has become the focus from which all else stems. He feels that art gave him a second chance in life, and he recognizes the importance of giving back to the community in the form of art.

Listen to Ronnie’s interview with Melanie J. Green on KPOO’s “The Ibeji Lounge” [the interview begins at 1:45]
Check this out on Chirbit
EAR TO THE GROUND
Hospitality House builds community strength by advocating policies and rendering services which foster self-sufficiency. Learn about the issues affecting our community and find out how you can take action by keeping your ear to the ground.
Market Street for the Masses on KQED Forum
In March, KQED Forum with Michael Krasny brought together leaders from San Francisco’s Mid-Market/Tenderloin neighborhoods and community outreach representatives of two major tech firms to discuss the how the Mid-Market changes are impacting those who have lived and worked in the community for decades.

Listen in on this compelling interview featuring Michael Anderer and Sam Dennison of The Market Street for the Masses Coalition, a collective voice of community organizations of which Hospitality House is a founding member.
COMMUNITY CALENDAR
[Get involved!]
Saturday, May 2nd
11am – 1pm SFSU Downtown Campus, 835 Market St. Room 677

Planning, Policymaking and Protest: Strategies in the fight against displacement
Hear from advocates on the front-lines of the struggle to preserve and build affordable housing as they discuss various approaches to mitigating the negative impacts of gentrification, what challenges they face, and how they see the road ahead. Moderated by Hospitality House Community Building Program Manager Joe Wilson, the panel features Amy Beinart, RAD Strategies Coordinator at Chinatown Community Development Center; Fernando Marti, Co-Director of Council of Community Housing Organizations; and James Tracy, Director of Community Organizing and Resident Engagement at Community Housing Partnership. Click here for more info.
Friday, May 8th
6pm – 930pm White Walls Gallery, 886 Geary St.