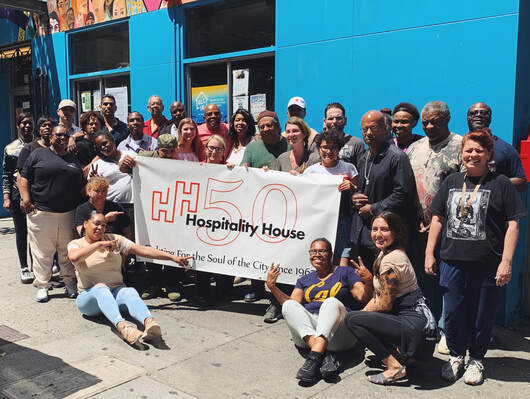 We are excited to launch our bi-monthly e-newsletter, “In The House.”  We’ll be sharing updates about Hospitality House programs, neighborhood events, and city-wide forums and activities.

We greatly appreciate your ongoing support, and through “In The House,” we’ll keep you up-to-date about the latest happenings at Hospitality House, as well as throughout the community, and across the City.

The phenomenal success of THHE Auction this past May – raising more than $162,000 for Hospitality House programs – also introduced us to an incredible audience of supporters and art enthusiasts. This year’s citywide celebration of our Community Arts Program’s 50th Anniversary was the catalyst for renewed excitement about how much the arts enrich our lives, and how much we rely on the talents of local artists as keepers of community culture.

As you’ll see from this inaugural edition of “In The House,” we’ve deepened our community engagement work on multiple fronts: It’s because of supporters like you that Hospitality House is thriving, our community-building work continues to explore new horizons, and new voices and new leaders emerge every day. We’re grateful for your belief in us, and your commitment to making San Francisco a better place for all.

And starting this month, we invite you to take a closer look, “In The House.”

Building Opportunity For All: Is Tech Exacerbating Inequality? 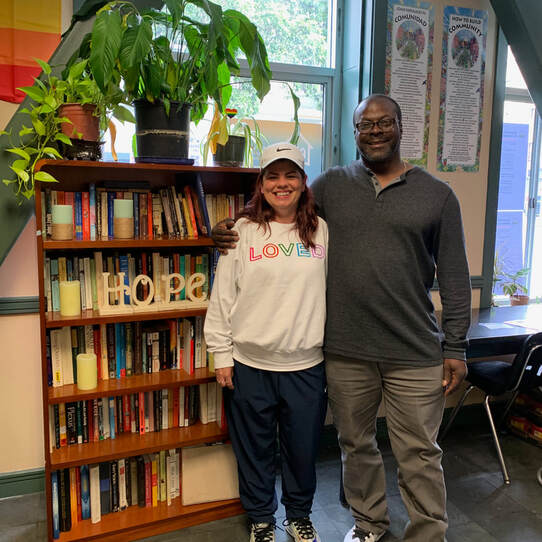 CBP Program Manager Windy Click and C.O. Peer-Advocate James Wren stand with hope.
Through the years, Hospitality House's Community Building Program (CBP)​ has developed into a central safe space where neighborhood residents can meet and connect with resources to strengthen community capacity and find the opportunity to recover from trauma. Besides offering leadership development and civic engagement workshops, CBP holds various support groups. The latest is called House Talk, a forum specifically for formerly incarcerated folks to share resources and ask questions about possibilities and the hope that comes with second chances.

“Being incarcerated for a day to a hundred years is all the same. We’re coming back and reuniting with society when they told us not to be here. So we just come together to share resources and success stories and allow a space to ask questions of what we’ve been through,” says Windy Click, a former "lifer" who now leads CBP as the Program Manager. She conceived the idea of creating a forum for formerly incarcerated people when she recognized a need for support information about essential resources; something significantly lacking at corporate transitional services for reentry.

“For me it was sharing those resources of going from a transitional home back into society. It was a lot different going from prison to a transitional home and then not having those resources, especially those who are from other cities and other counties that have come here to San Francisco and don’t know those resources and are kind of lost in that shuffle. So House Talk will give them a forum to where those who are from all over can come and share those resources, those job opportunities, things of that nature,” says James Wren, who joined Hospitality House after reentry and is now a Community Organizing Peer-Advocate.

The first House Talk attracted a room full of individuals whose sentences added up to 343 years, according to Windy. "It also showed us the racial discrimination (of the prison system). I was the only Caucasian person in the room. Everybody else was a person of color."

Windy attributes the success of House Talk to Hospitality House's peer-based model of engaging the community—where shared experiences between staff and community members allow everyone the ability to relate to each other on a much deeper level, thus opening up conversations. James agreed.

Are you ALL IN?: Solutions To Homelessness Start With You